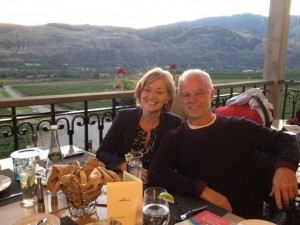 I can honestly say I never saw it coming and I never thought I’d have to deal with it. In our first round of filming, the experts told us alcohol use disorder is a chronic relapsing condition and yet it never occurred to me it would happen to Mike. How smug of me.

The night that Mike drank, I panicked. Mike’s disorder had been so severe before, I feared we were heading in that direction again. Then I had to step out of my “concerned partner brain,” to put on my filmmaker’s hat and think about how to tell this part of the story, from his perspective. And mine. The viewer would be curious what my reaction would be. So, Mike and I turned on our IPhones and began to interview each other about the relapse. You’ll see part of the conversation in the film. I’m resplendent in my ancient fuzzy blue housecoat.

That night, I didn’t know whether that material would ever make it to air. But in documentary filmmaking, when something happens you need to get it on camera, then decide later what to do with it. If I didn’t roll on the relapse, the heightened anxiety and uncertainty of that moment would be lost.

Mike’s relapse upped the stakes for our film. It made our search for new treatment options very personal and urgent, because in the past the go-to treatment, AA and the 12 steps, didn’t work for Mike. The biggest challenge for me during this time, was allowing Mike his autonomy to manage his disorder. Experts like Dr. Bill Miller and Dr. Keith Humphreys, whom you’ll meet in the film, told us they were humbled by the wisdom of their clients. Wisdom that’s too often written off, as in “Oh he’s such a drunk he can’t make a decision to save his life.” This is Mike’s life we are talking about. Like any other life-threatening illness or disorder, surely the patient must have a voice?

Tune in to the Nature of Things Thursday January 21st, to see the choices Mike made and how it all turned out.

I’m just wondering if this will also be available online, as I only have netflix and no conventional tv.

Wasted will be available within Canada for free viewing on cbc.ca. Check back with us and weâ€™ll publish the link when the CBC makes it available after the broadcast, and on ATNS (https://addictionthenextstep.com/documentary/) for those outside Canada.

Relapse is not preordained or a prerequisite for anyone recovering from drug and alcohol abuse, but it does happen. Reading your post brought back a Heartwarming memory for me. I attended Mikes one year cake, and clearly remember the look on his face of being Happy, Joyous and Free !